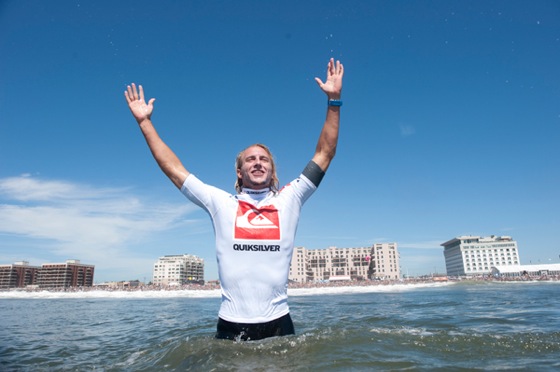 Owen Wright takes his revenge on Kelly Slater by winning the Quiksilver Pro New York world surf contest last week.
In sunny clean 4-5ft conditions, on Friday 9th September, a little bit of history was made in the surf.  Australian surfer Owen Wright claimed the first elite tour victory, earned himself a massive $300,000 USD paycheck and defeated x10 world champion surfer Kelly Slater (USA).... All in a day's work for the explosive Aussie.
In what was the first world surf championship event to be held on the East coast of the USA, Quiksilver offered up the biggest prize purse in the surfing world.  So when finals day kicked off, it was little wonder that the remaining surfers were salivating for a good result. 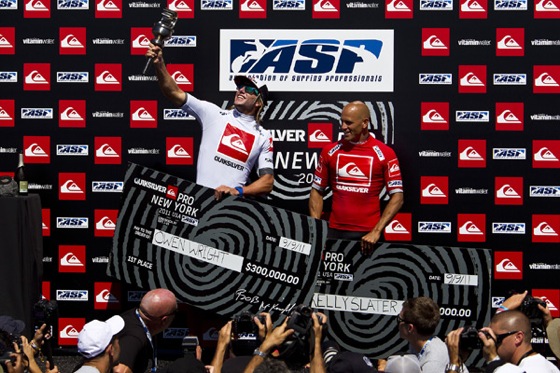 Wright's defeat of Slater in the final was a re-run of the previous week's match up at the Billabong Pro Tahiti, where Slater had taken the title.  However, it was Wright's time to shine.  Wright had to take down an in-form Brazilian rookie Alejo Muniz in the semis and fellow compatriot Julian Wilson in the quarters; whereas Slater had to defeat the ever improving Josh Kerr (AUS) in the quarters, and a very dangerous Taj Burrow (AUS) in the semis.  The two surfers had silenced some of the best surfers in the contest, so it was game on when they finally met again.
Slater had performed an amazing aerial maneuver in the dying moments of his semi final against Burrow, and it seemed as those that the perfect score was going to be his pinnacle as he just couldn't match it when it came to the final.  It was all about Wright, as he bashed out aerial and cutback after layback hack... Wright scored a 7.0, a 9.23, 8.60, a 7.10 and an 8.67.  It was relentless and gave him a final combination score of 17.90. 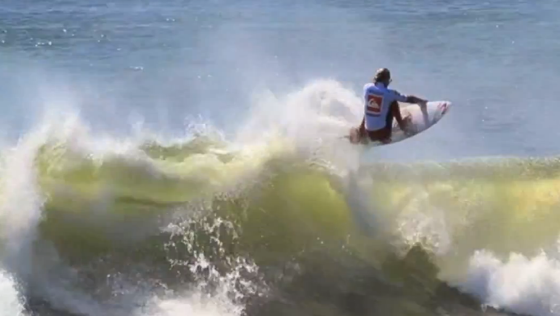 Slater just couldn't match Wright's onslaught, and only managed an 8.0 ride and a 6.53 that stood out, combining to a total of 14.53.  It was Wright's day, and his first ASP dreamtour win.
After the completion of the sixth event out of eleven on the dreamtour, things are changing.  The top 10 surfers have been shaken up with Slater still leading the ratings, but with Wright hotly following pursuit in second.
However, the line up itself is also changing over.  The top 32 surfers in the world (and 2 wildcards) are going to be replacing those on the world tour- so if a surfer hasn't backed up their dreamtour points with Prime and Star contest results, they will be knocked off the WCT and will be back to grinding it out on the WQS.  So the line up in the water at the Hurley Pro at Trestles, California this month is going to look a little different.  Catch it from 18th to 24th September at www.hurley.com/hurleypro.