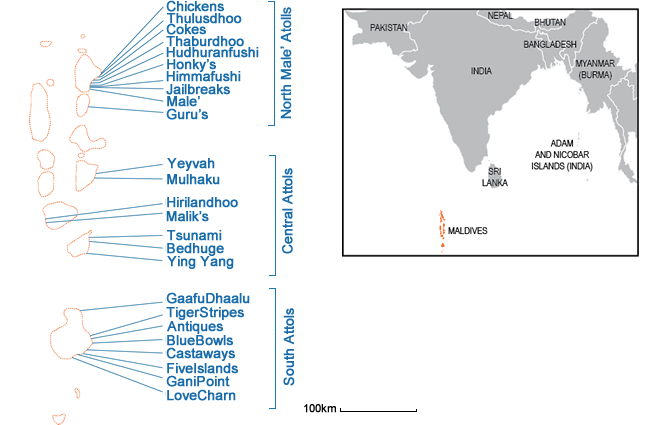 History of surfing in The Maldives

The history of surfing in the Maldives reads like a Hollywood movie that begins its tale in the early 1970’s. Sydney surfers and intrepid explorers Tony Hussein-Hinde and Mark Scanlon were on their way to another part of the Indian Ocean when they ran aground and became shipwrecked; after gaining their bearings, they started to salvage what they could from the wreckage and on their journey they passed the reefs of the North Male Atolls. Because of the season, they were greeted with onshore walls but that didn’t deter Tony who remarked; "We reckoned those reefs would be perfect once the wind switched." Tony was right, the seasons changed, the winds blew offshore and Tony had discovered the best Maldives surf spots!

What happened next, and most certainly wouldn’t happen now, is that they kept the world class Maldives surf a secret… for an astounding 15 years! In the last 10 years the islands have become a great destination to visit, especially for surf. Maldives surf resorts are all about getting empty wave perfection and the easy island living, providing you with a majestic surf experience that is uncomparable to anything else!

Maldives surf spots are some of the best waves in the world, with endless surf breaks scattered among the countries 1192 islands. Swell size averages from shoulder to head high, making for an awesome beginner and intermediate Maldives surf trip; yet the Maldives still offers overhead, seemingly endless barrels that every advanced surfers yearns for.

The Maldives surf season depends on the individual Atolls, but most of the archipelago is perfect for surfing from April till October, yet March and November are also good. In short, you can get the best surf of your life during any month when surfing in the Maldives. There are some great Maldives surf spots, with many of the breaks close to each other, so finding good quality surf, day in day out is easy! The best way to reach these spots is by boat.

Many of the waves are nameless or even yet to be discovered, so one of the best feelings about being on a Maldives surf camp is the sense of adventure and discovery. For those who want to surf perfect waves with just your friends in the water, this is the surf holiday for you.

Malé International Airport is on Huhule Island, a few kilometres from the capital. It is the only international airport in the Maldives, so this is the jumping off point for your Maldives surf adventure.

Where to Surf in the Maldives

The North Male Atolls is the best region to Surf in the Maldives. From April and October tend to be the best time to travel. One of the most consistent waves in the North Male Atolls is Chickens, this wave lies on the uninhabited island of Villingilimathi Huraa, next to Thulusdhoo Island, and is a super-long left hander, with two sections that can offer up great barrels.

Cokes is also close to Thulusdhoo, this is a right-hander that will be appeal to those on an intermediate surf Maldives holiday, as it’s a hollow wave that reels along a shallow reef and works best when winds are blowing from the south and north east. Located in the island of Thaburudhoo is Honky’s, which is arguably one of the best Maldives surf spots, when the right conditions show up it offers incredibly long walls with numerous barrel sections and shoulders to carve up. On the same island, you’ll find Sultan’s, one of the more user-friendly waves that will provide unlimited hours of fun when surfing in the Maldives.

Jailbreaks is located on the island of Himmafushi and hasn’t been surfed for as long as the other spots, as it’s right across from the national jail! Can you imagine serving a sentence, with perfect waves rolling below your cell window in tropical climates?… that sounds like torture!

For complete beginners on a Maldives surf trip you should head to the South Male Atoll Guru’s, you can paddle straight out from the white sand shoreline and thus is one of the most popular breaks for local surfers.

Many people who are surfing in the Maldives visit Himmafushi on day trips organised by Maldives surf resorts. It’s great for wandering around and exploring as it’s a beautiful village, here you can pick up souvenirs such as carved rosewood dolphins, sharks and rays. When not surfing, a Maldives surf holiday is all about relaxation amongst some of the most beautiful scenery in the world. Snorkel, swim with dolphins and turtles  or go big game fishing.

The conditions in Central Atolls are more moderate size, great for intermediates or those looking to learn to surf in the Maldives. The Maldives surf season here runs from March until November. Surfing in the Central Atolls is one of the best Maldives surf experiences you can ask for, if you find a heavy, hollow breaking wave in one spot, there are good chances you’ll find a more manageable wave right next door. That’s the joy of a stay at a Maldives surf camp, there are waves for all abilities around every nook and cranny.

Mulhaku Rights and Left are a slow walling spot that can provide brilliant beginner rides. Some of the best fun can be had when you paddle out at Veyvah, this spot is great for all surfers and is a long left hander that walls up on multiple sections, a perfect wave for longboards and mini mals. Malik’s, on the island of Hirilandhoo, has a left hander that speeds across the reef, giving you a few chances to pull into the green room.

When big SE swells, combed by a W wind start to march their way to the South Atolls, Bedhuge comes to life, this perfect right hander will offer up the wave of a lifetime for intermediate and advanced surfers. Tsunami's picks up the most swell out of all the east facing spots in the Laamu Atoll, providing great rides with three different sections. Yin Yang works best under strong SE swell when it will churn out thick barrels but fear not, this Maldives surf spot will also give more mellow rides further on the outside for those who are knew to the sport.

3. Southern Atolls
Named surf spots: 11
The Southern Atolls are a great Maldives surf destination for those wanting to escape the drab conditions of the Northern Hemisphere winter, as the South Atolls best surf conditions are often between February and April, just before the SW monsoon starts to roll in. This also means that it pumps when the monsoon ends as well, between September and November.

The South Atolls are still considered one of surfing’s last frontiers, joining the ranks of Alaska and Siberia; there are many waves yet to be ridden, you could even end up naming a spot or two of your own on our Maldives surf holidays. This is one of the most remote areas on the planet, especially when it comes to hunting waves; charter boats, sea planes and traditional boats are as common as VW campervans at your local.

Gaafu Dhaalu Atoll, also known as the Huvadhoo Atoll, is considered the most consistent stretch of water in the Maldives and picks up swell from all directions. Tiger Stripes or Rockets is a super-fun left hand wall. For those regular footers who are relatively new to the sport, head to the forgiving peaks of Antiques. Voodoos or Blue Bowls produces some of the longest rights you can encounter when on a Maldives surf camp trip.

For a real island surfing experience, you should head to the aptly named Castaways, this easy to surf right hander is best tackled on a N wind, with the surfing scenery here hard to beat. Think white sand, palm trees and turtles swimming past you on the way back to the line-up. That will give you a picture of how beautiful this place is! For those looking to push their surfing skill up a notch, we suggest heading to Five Islands, or Gani Point as it’s sometimes known. Love Charm is one of the few left handers, but one of the most consistent waves in the area.

when you’re not hitting up the surf, relax, drink a coconut and laze about the beach, before snorkelling in the lagoon… this is the Maldives afterall!

When surfing in the Maldives there is no need to pack a wetsuit, even in the “coldest” of days the water will never drop below 27°C and the air temperature will rarely see temperatures drop below 25°C. A UV rash-guard, boardies and reef boots, as well as SPF 50 sunscreen are the standard attire here; whilst a hat in the water can add an extra hour or two to your sessions.

‘Iruvai’ is the NE monsoon between December and March, it is the hottest and driest time to be on a Maldives surf holiday, so expect lots of blue skies, with the occasional morning or evening downpour. Don’t worry though, these only last about an hour. May to October sees the ‘Hulhangu’ monsoon season which comes from the SW and brings with it more rainfall and fewer storms.

Read about Surfing in Maldives from our blog:

View all our blog posts on Surfing in Maldives