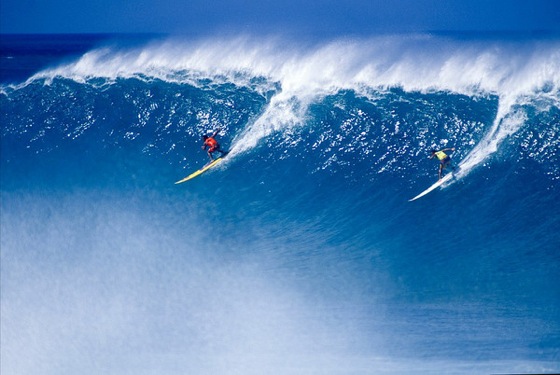 Wave: Waimea
Where: North Shore, Oahu, Hawaii, USA
When: Best during the winter season
Why: Sacred, enormous, breaks when all other North Shores can't handle the swell
Stats: Starts working at 15ft+ with a West to North West swell
There are few places that are as hallowed in the surfing world as Waimea Bay.  The natural amphitheater of the bay looks down onto a right hand point break that has scared generations of Hawaiians, travellers and surfers alike.  Why has Waimea caused so much fear over the years?  The answer lies in our basic instincts, for when Waimea's waves start to break, the ground shakes like in an earth quake and the sound is like thunder.

View Larger Map
If you were to visit Waimea Bay during the summer months for your surf holiday you'd come across one of the most serenely beautiful spots on the North Shore of Oahu, Hawaii.  Clear blue waters are fed by the stream flowing from the mountains behind.  Tourists visit either to spend the day at the placid beach, or to say they saw the bay, and take the tale home to their families, for Waimea has a mythic quality to her.  For centuries no one would go in the water, let alone think of surfing the break.  The reason for the fear of Waimea comes from her changeable nature.  Although during the summer she is calm and inviting, in winter she is a different beast. 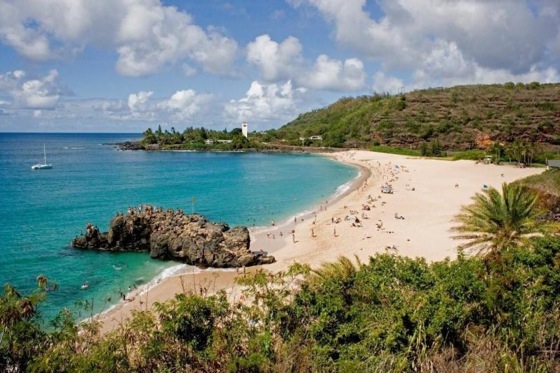 When the first winter swells pick up in the Pacific Ocean and start to hit the North Shore of Oahu the excitement is always tangible.  Surfers from all over the world flock to the seven mile miracle that is the North Shore.  There are breaks after breaks lining the coast that are simply phenomenal.  However, Waimea is held even more sacred than the best of waves, for she only works under certain conditions. 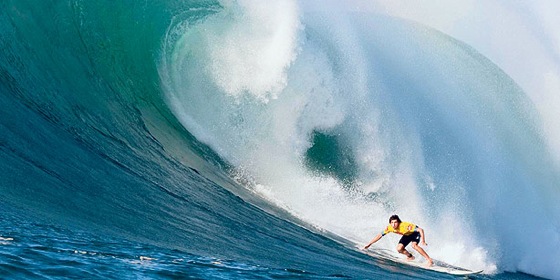 It is when all other beaches are closed with warning signs and are taped up by the coastguard, that Waimea comes alive. The break itself forms in deep water, so 15ft of swell is no problem for the bay.  As the swell pushes through Waimea's reef creates a right hand break that normally creates thick open faced waves, however this can change to enormous barrels that explode like bombs when its waves reach the 30-40ft mark. 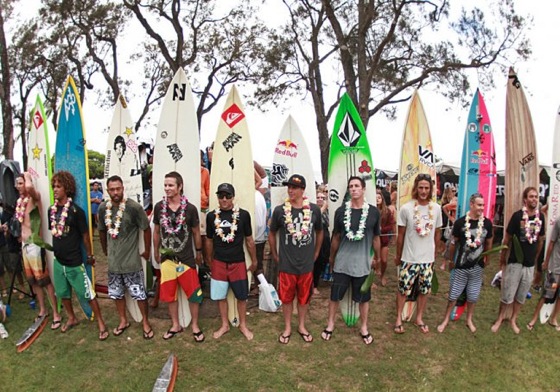 The pinnacle of the Winter season is the Quiksilver Pro: The Eddie Big Wave Invitational.  This rare surf contest tends to be held once every 4 years, although it has the possibility of running every year.  The difference to other surfer events is that it doesn't run unless there is a consistent swell of 25ft+ for at least 8 hours.  There is a holding period running from December to February, and entry to the contest is by invitation only and represents the world's best big wave riders.
To see any human paddle into 40ft waves is breathtaking and legendary, let alone to witness their survival and dominance of the epic waves.  All in memory of the North Shore's first lifeguard Eddie Aikau, who gave his life in order to save a capsized boat of people.  Eddie loved the waves Waimea's waves, and helped to show how it could be ridden along with the other groundbreakers of the 1970s.
Waimea may not still hold the same fear over surfers as it did 50 years ago, but it will always be a sacred spot that only the brave dare to go.