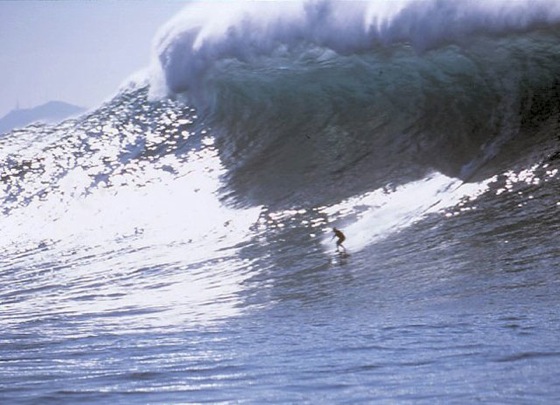 Wave: Belharra, aka Mammouth
Where: Off the coast of Saint Jean-de-Luz, Basque Country, France
When: Hit headlines in 2003, but known by locals for well over 10 years beforehand.
Why: One of the best big waves in Europe
Stats: Starts breaking at 12ft, can reach heights of 60ft+, and no one knows how big it could get.

View Larger Map
Out in the Atlantic Ocean every so often enormous freak waves are created.  You never know when they will appear and how big they will be... but we know the location of one of these godly beasts- Belharra.
Lying approximately 2km of the coast of Saint Jean-de-Luz in the French Basque Country lies the titan wave Belharra. Accessible only by boat or jetski, this rock-reef break only raises its head a handful of times a year- but what a day it is when it does.
Belharra (literally meaning “grass” or “seaweed” in the Basque language) is a relatively recent discovery in the bigwave surfing world.  You may have come across it in the surf film “The Billabong Odyssey” back in 2003 and since then it has grown in popularity to be considered as one of the best tow-in surf spots in Europe.  Its power, speed and shear brute force have the pros and adrenaline fiends clamoring to take it on.
The wave is generated by huge storms out in the Atlantic which bombard the south western coast of France usually during the winter months.  Belharra is created by massive swells hitting the rock reef approximately 15ft below sea level when it's low tide.  The rock shelf forces the enormous swells up into an explosive breaking wave, which produces the roaring fast moving wave faces that big wave riders live for. 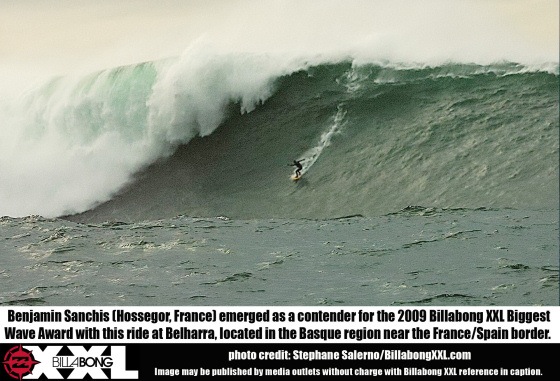 Belharra provides both lefts and rights to be ridden, and is strictly for those who know what they are doing.  If you get this one wrong, then you can be looking at quite a hold down underneath its foamy surface, and the danger of being pushed down onto the sharp rock reef sea floor.
However, in spite of the dangers Belharra still lures many international surfers, and provides a world class environment for the local French, Basque and Spanish tow in surfers to push the limits of the sport.  So next time you're on your surfing holiday in France, make a point of visiting Saint Jean-de-Luz and asking for a few stories of when Belharra breaks...
How to get there:
Fly to Biarritz and then drive or take the bus to Saint Jean-de-Luz.  For consistent non-death defying waves, rent an apartment in either Biarritz itself or Hossegor (30mins north of Biarritz by car).  Then head to La Grande Plage in Biarritz for fun, slightly more long-board friendly waves; or go to La Plage Centrale off Place des Landais in Hossegor for the world class shore breaks ideal for shortboarders.
Check out this rare clip of a surfer paddling into one of Belharra's bombs...