Prices starting from $94.68 per night
Da Gama Way, Cape St Francis, South Africa
Chat with a host who can help organise your trip...

Bordering the beach at Cape St Francis and just 90 minutes from Port Elizabeth airport, Cape St Francis Resort ticks all the boxes as a perfect beach holiday destination. The Resorts' unique setting with a selection of accommodation options from conventional hotel rooms, three and four bedroom cottages or luxury beach villas appeals to couples, families and anyone who loves a beach holiday. All are suitable for either a bed and breakfast choice or a self to catering option.

Renowned as a water sport paradise with surfing, kite to surfing, surf ski and canoe paddling on the beautiful waters off both Cape St Francis and St Francis Bay’s as well as on the nearby Kromme River. For golfers, the top ten rated St Francis Links offers the keen golfer an excellent challenge of links golf with the nearby St Francis Bay Golf Club offering an easier but still challenging round of golf.

With the mildest temperatures and the longest sunshine hours on the coast, Cape St Francis is a unique and exclusive paradise on the South African southern coast which draws holidaymakers from all over the world to enjoy the glorious beaches, excellent water to sport facilities, leisurely lifestyle and the magical beauty of the unspoilt surroundings.

Seal Point Beach is easy to get to and when conditions are fine, shows off a perfect, uncluttered right break that ranks it as one of the top surfing spots in South Africa. Not just for the experienced, newbies can also give the waves a try (lessons available).

Apart from the exquisite beach and a wide choice of sporting facilities there is more than just the sand, sea, sun and sport and Cape St Francis Resort is the perfect base from which to explore the entire St Francis region. Surrounded by nature reserves where wonderful examples of different species of fynbos grow in their natural environment within the seven biomes that exist in the 132 hectares of nature areas. Cape St Francis is a hiker’s wonderland with excellent hiking paths that meander through the nature reserves, at times emerging along the rugged coastline.

Seal Point and the historic Cape St Francis Lighthouse, the tallest masonry constructed lighthouse has been keeping watch since 1878
And after a full day of activities enjoying and exploring all the St Francis region has to offer, a sundowner cruise on the canals of St Francis Bay offers the perfect end to a day at the Cape St Francis Resort.

Comfort merges with stylishness in this gorgeous five bedroom villa that proudly displays an intricately carved wooden bar,large enough for at least eight people to gather around for a chat. Although all the villas are incredibly spacious, Nautilus Place is arguably the best for getting together as the open plan living space delicately balances areas for jovial get to togethers with alcoves for quiet contemplation. There is an outdoor swimming pool as well as braai and boma, soundly protected from both the east and west wind, where guests can enjoy the outdoors even in inclement weather.Rooms 2, 3 and 4 are situated in the first level of the house at a comfortable distance from the main living area while rooms 1 and 5 occupy the top level.A guest bathroom is located in the entrance hall and there is a separate scullery and laundry.
King beds
Direct Beach Access
Fully equipped Kitchen
En to suite bathrooms
Daily cleaning
Twin beds
TV’s with selected channels
Braai Facilities
Swimming Pool
Double garage

All the accommodation within the resort, direct access to the splendid Cape St Francis beach is within a short walk from all the cottages with some of the cottages having magnificent views over the beach and sea beyond.

The luxury villas offer up to market accommodation including some with your own swimming pool and roof top terrace with sea views. Each property is designed with laid back open plan living in mind with a focus on outdoor entertaining. All bedrooms offer King or Queen size beds with many of them en to suite.

The Village Break cottages offer all you will need for a relaxed self to catering family beach holiday. The open plan lounge / dining areas have comfortable couches and a dining table where the family can gather after a day of sun and sea or to watch TV. Off the lounge /dining area is a fully equipped kitchen fitted with a stove, hob, fridge/ freezer and microwave oven as well as all cutlery, crockery and kitchen utensils. The bedrooms offer a combination of queen beds, double beds and single beds to suit family needs and to further ensure a relaxed holiday you can arrange for your cottage to be serviced by our housekeeping staff.

Ideal accommodation for a family or a group of close friends spending time together on a beach holiday. A mid to week break or weekend getaway at a perfect seaside resort.

A total of 23 bedrooms, offered on a bed and breakfast basis in one of the 11 sea facing rooms. Rooms are located in 4 or 5 bed to roomed beach houses, each with a lounge, kitchen, swimming pool and private beach access. Lounges have a fireplace for those cooler winter evenings.

Clustered around the enclosed and private swimming pool and hidden away in the lush gardens are 6 apartment blocks containing a combined total of 34 units, each with their own kitchenettes and en suite bathrooms. Guests have a choice of either upstairs or downstairs apartments with downstairs units sporting lovely little patios shaded by the trees, and upstairs boasting balconies where you can open the doors on warm summer nights to enjoy the refreshing sea breeze.

This rate is B&B, and self catering options are also available.

We provide Airport Transfers from and to Port Elizabeth and they can be booked in the booking steps.

Come Surf With Us

Surf Lessons can be added in the booking steps if they are not already included in a package. 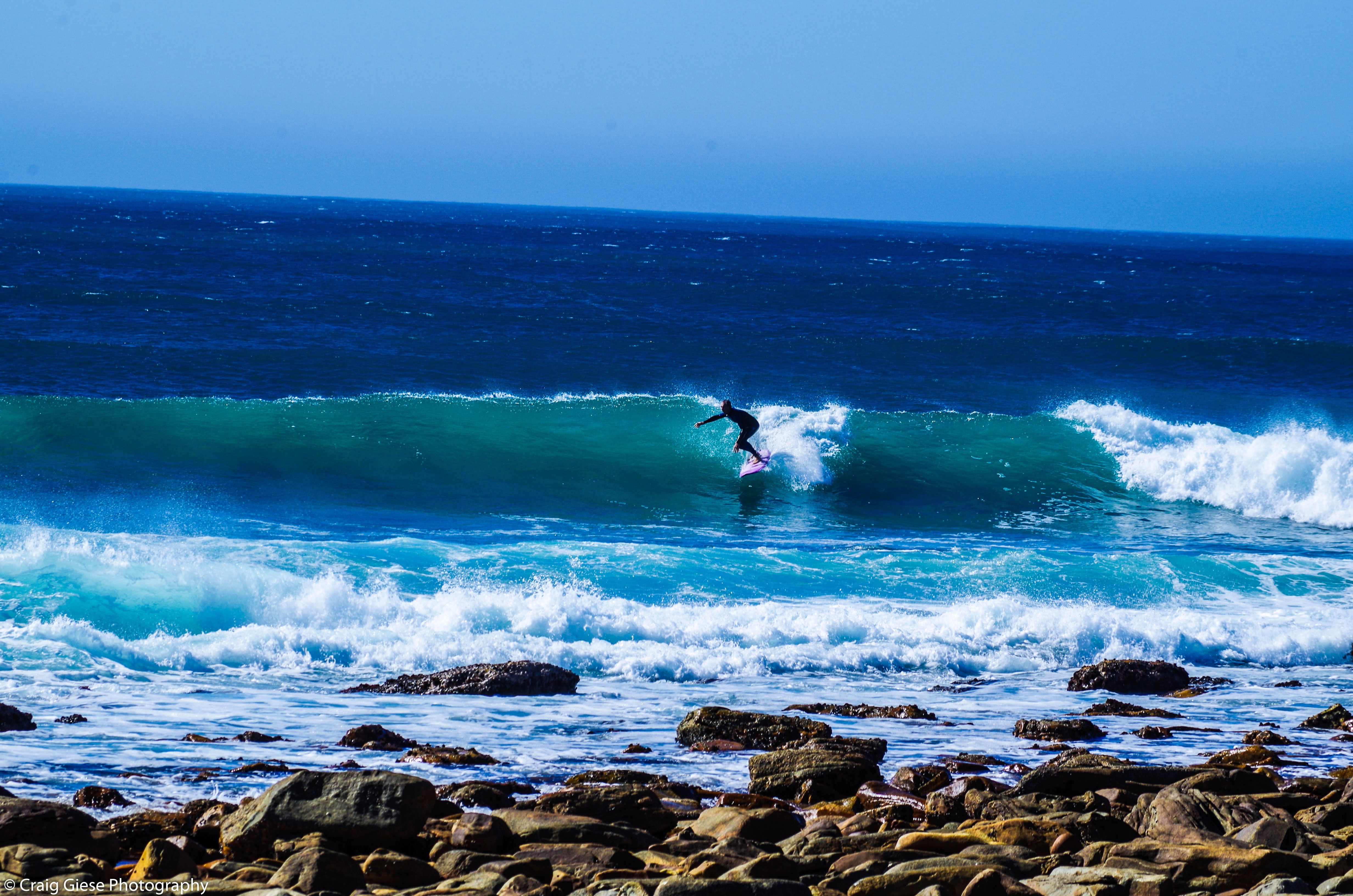 Seal Point wild side
This rugged stretch of exposed coast includes Slangbaai, Oyster Bay and Thysbaai. Surfed in summer in small swell and northeast winds (offshore here). Mostly rock slabs offering short, powerful waves with sketchy access. Locals know.
Boulders
Fickle reef point running into a small rocky bay in front of the car park above Oyster Row. Requires huge swell similar to Bruce’s Beauties, but Boulders is a left to breaking wave. To get it good, buy a local lots of beer.
Seal Point
Seals, with its landmark lighthouse, is a rocky point break divided into two sections by a fullstop rock that marks the take to off zone for the mid break. The outside gets classic, especially on a medium to big south to southeast swell. Prevailing southwest swell must refract around the outside point and reform at Seals. You can ride waves all the way past the fullstop rock down the point – about a 150 to metre ride. Beware the fullstop. It can take you from hero to zero in a millisecond as you pull in to the barrel, then pull in to a rock. Also, mind the urchins.
Seals beach
Depending on banks and tides, pick your spot from the caravan park to the bottom of the point. Consistent wave in the corner. The beach at Seals gets plenty of swell. It is a good summer spot. However, the sand banks tend to close out during big winter swell. Needs west winds.
Ducks
Sandbar and reef combination on the other side of the bay. Sheltered from the northeast by the northern rim of the bay. Again, usually a summer spot. Gets good. Sharky.
Killers
Around Cape St Francis and into St Francis Bay at the top lies Killers, a sketchy spot that breaks viciously hard along evil to looking rocks. Needs east swell and west winds.
Bruce’s
A clean, green jewel. Forget the gentle tubing hotdog waves you saw in Endless Summer. When the east swell is grinding, this wave churns down the point at Cape St Francis like a runaway steam train, growling and spitting. The drop at big Bruce’s is a stomach churner. And slotting into the gaping barrel is to dice with a juddering lip cracking along a jagged line of rocks. The reef lies at the same depth and angle to the swell, creating a perfect curling consistency. To feast your eyes on these grinding green room tubes is to see one of the surfing wonders of the world, even though the sand does not cover the point like it used to. Best two hours on either side of low tide, unless dik.
Huletts Left
Same as Bruce’s. Needs huge south swell or big east swell and a low to mid tide. Nice beefy left with a mellow take to off that improves down the line. Easy access through slipway.
Huletts Right
Right to hand reef point that also suffered from sand redistribution. Not as good as before. Mellow wave, ideal for longboarders. Incoming to high tide. Good protection from strong westerlies.
Main Beach
Bad development has ruined it like Anne’s. Sand is gone, no beach at high tide. Suffers from back wash. Occasionally gets good if sand builds up. Needs west winds.
Anne Avenue
Used to have excellent sandbars, but poor development has killed the beach and ruined this spot. Gets good sometimes, but not as consistent.
Soweto’s
Also called Rushmere’s, the quality of this sand and reef combination depends on sand distribution. Breaks left and right. Wind must blow from the west. S AND PITS:

The following cards are accepted at this property:

I am privelaged to be associated with the Resort and to live alongside one of South Africa's most wonderful beaches.Not only do we swim and surf here but play golf (there are two courses one being the number 5 rated course in South Africa , namely St Francis Links0, walk along the wild side, chill up river and find time to relax.