A tropical resort situated directly in front of 5 epic waves all visible from your traditional style Bungalows, each with its own en to suite with western toilets and showers surrounded by lush gardens & nestled in a 2 hectare absolute beachfront coconut grove.

Our 2 traditional Mentawai styled and built Bungalows are spacious each boasting 4 king single beds with high quality Italian made mattresses & mosquito nets.
Plus a main large house for drinks, meals, hanging out and partying (if that's your thing) or just lazing around with a good book from our extensive library.
Couples room is also available.
WiFi is also available at 500,000idr per GB

We also have a speedboat to the other 25+ epic waves in the surrounding area, which is included in the price of your stay. (along with the Mentawai Government surfing levy tax)

As mentioned before we are located in the worlds most wave rich area, exclusively being the only resort on our side of the island & having 5 breaks right in front of camp means you don't have to wait around for other guests to take a speedboat every time you want to go surfing as it is with all other camps, you can literally get up as early or late as you want check the 5 waves from your bed and decide which one your going to paddle out to all on your own time.

Out the Front
Nipussi is a wave for all surfing levels its a high performance long right hander with plenty of wall for multiple maneuvers & being the most consistent wave in the Mentawai region assures us we can guarantee you waves everyday of your trip, hands down.
Bankvaults which is also in front of camp is a favorite for those of you chasing big heavy barrels and something a lot more serious a long heaving right that handles any where from 2 foot to 20+ foot.
MIA Peak (30m walk from Bungalow 2) is a short punchy A to frame that can deliver stand up left hand pits on its day and a longer fun right.
Piggy Banks & the Klit both heavy slabs super sucky mainly for advanced surfers and body boarders, will deliver amazing barrels and photographs.

We cater for all surfing skill levels, we also have amazing snorkeling/spearfishing for in between surfs/non to surfers, beautiful spots to sun to bake, walking trails, darts, board games, projector for movies, soccer, cricket etc etc & and an ATV motorbike to buzz around on.

Awesome staff
Great location with consistent waves directly out front. Food is 10/10 and so is the service. All round great place to stay and very affordable compared to other camps

Wifi at a reasonable price

Traditional style Bungalows situated 30m from the waters edge with spacious rooms and bungalows. Bungalow 1 contains 4 beds which are king singles, italian mattresses, mosquito nets, and battery pack fans. There is also a lockable wardrobe for all valuables (which isn't needed). Bungalow 2 is a two bedroom, with all the same features as bungalow one, but has a room for couples when requested. Each bungalow also has an en suited bathroom.

We provide Airport Transfers from and to Padang and they can be booked in the booking steps.

The Peak (1 of 5 breaks right in front of camp)

The Peak is directly in front of of Bungalow 2 and visible from camp. The keyhole is 30 m from the beach. This photo is taken right in front of camp.

Nipussi (1 of 5 breaks right in front of camp)

Nipussi is the most consistent break in the Mentawai Islands region. It's a super friendly break and enjoyed by all surfing levels. Nipussi is directly in front of the Main house and the keyhole is 30m from camp. It breaks from 1ft to 12ft. This photo was taken from the main house.

The Klit (1 of 5 breaks right in front of camp)

This break is a short 3 min stroll from M.I.A Surfcamp and suitable for both surfers and boogers. It's suitable at mid to high tide and not for the faint hearted. This wave is never crowded and is the owner's favourite wave. It is also visible from camp. 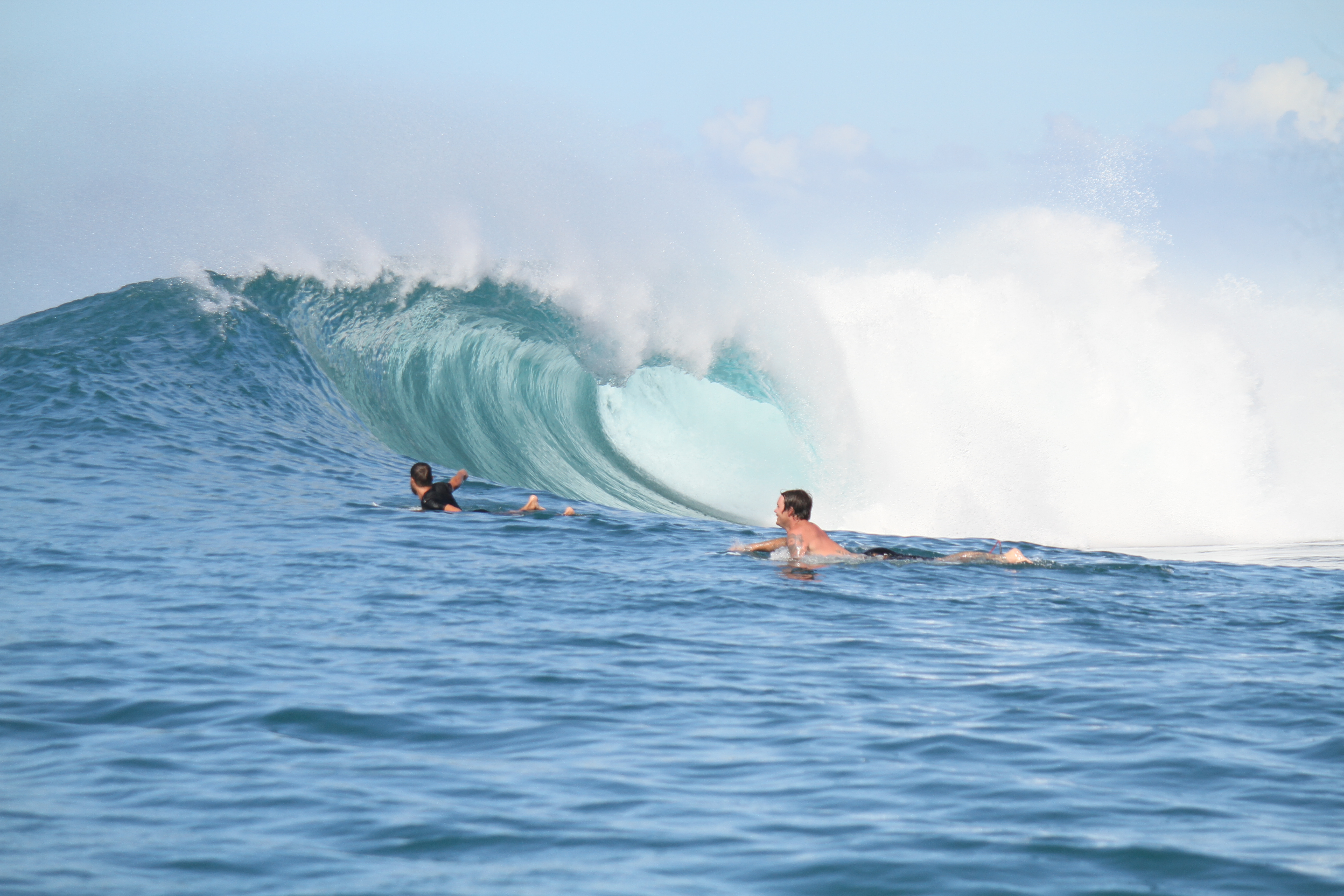 Piggybanks (1 of 5 breaks right in front of camp)

Piggybanks is also suitable for both surfers and boogers and again not for the faint hearted. This break is also visible from camp and only a short 5min stroll from camp.

Bankvaults (1 of 5 breaks right in front of camp)

Bankvaults is a World to class wave and is one of the many breaks people travel all over the world for the chance to score. It breaks from 3ft up. This break is also visible from camp and a short 7min stroll up from the beach. This picture is our Surf guide Dicko and is pretty much the biggest we have seen it, so don't be put off as i decided to post this picture to show that it does get big.

Baby Ebay is 2min from our boat mooring. It's super fun and an underrated break. 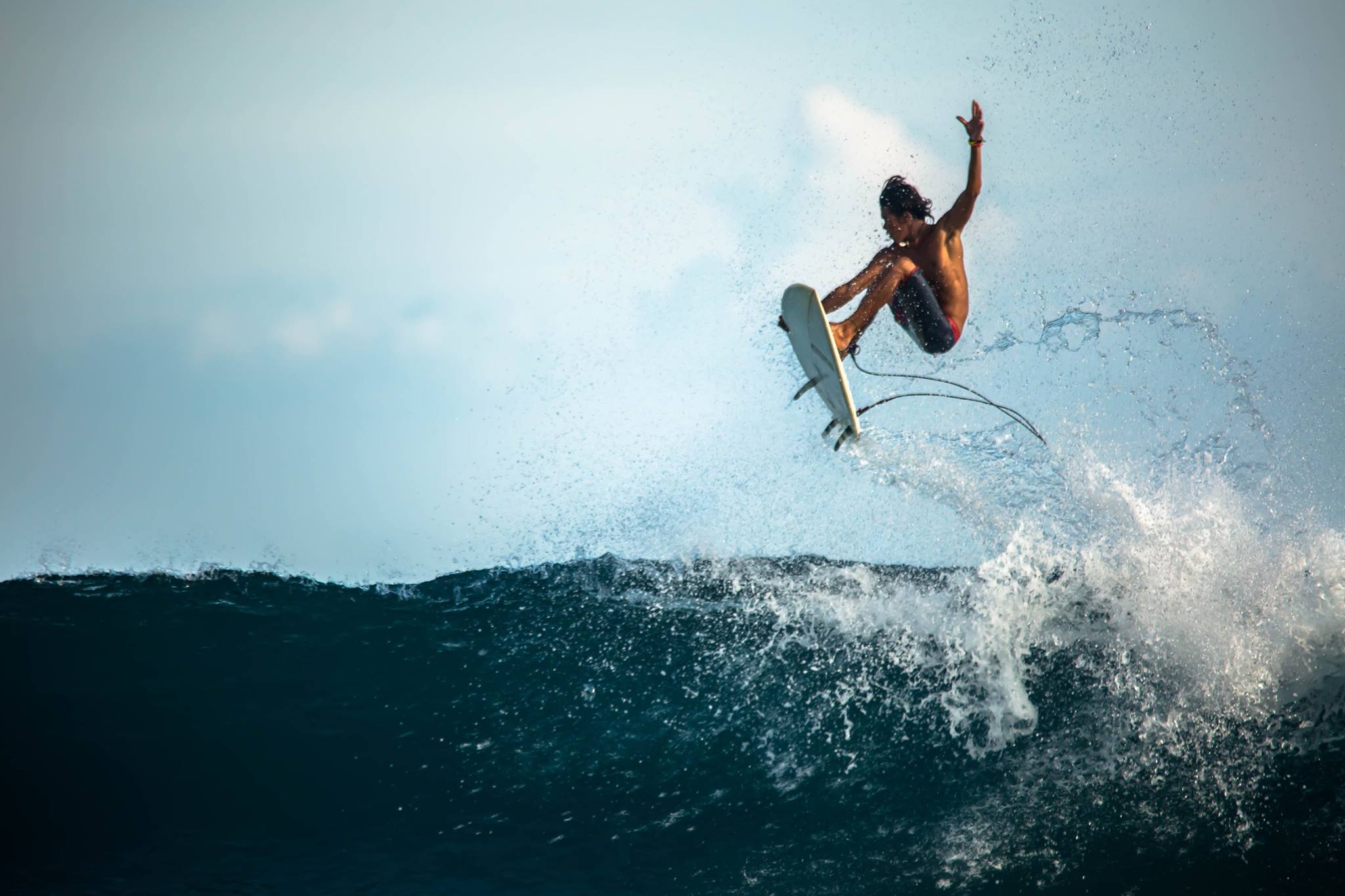 Pitstops is a break for all surfing levels and doesn't break over 6ft. It's fun barrels make an enjoyable for all surfers.

Ebay is a world class wave and people travel all over the world for their chance to score. It's 5 min from M.I.A Surfcamp boat mooring.

Beng Bengs is a wave mostly suitable for beginners and intermediate surfers. To be honest it's not a popular wave but is always an option.

Kandui is a popular break with confident surfers. It breaks so mechanically and is no wonder why it's popular. It's a world class break and people travel from all over the world for their chance to surf it.

Rifles is a world to class wave and again most people travel all of the world to surf it. It is quite shallow and not for the faint hearted.

Dog Reef is super fun when it's on. It doesn't break as much as the others and is properly the furthest wave we travel via boat. It's such a popular wave with the guests and always grinning from ear to ear when it's scored. 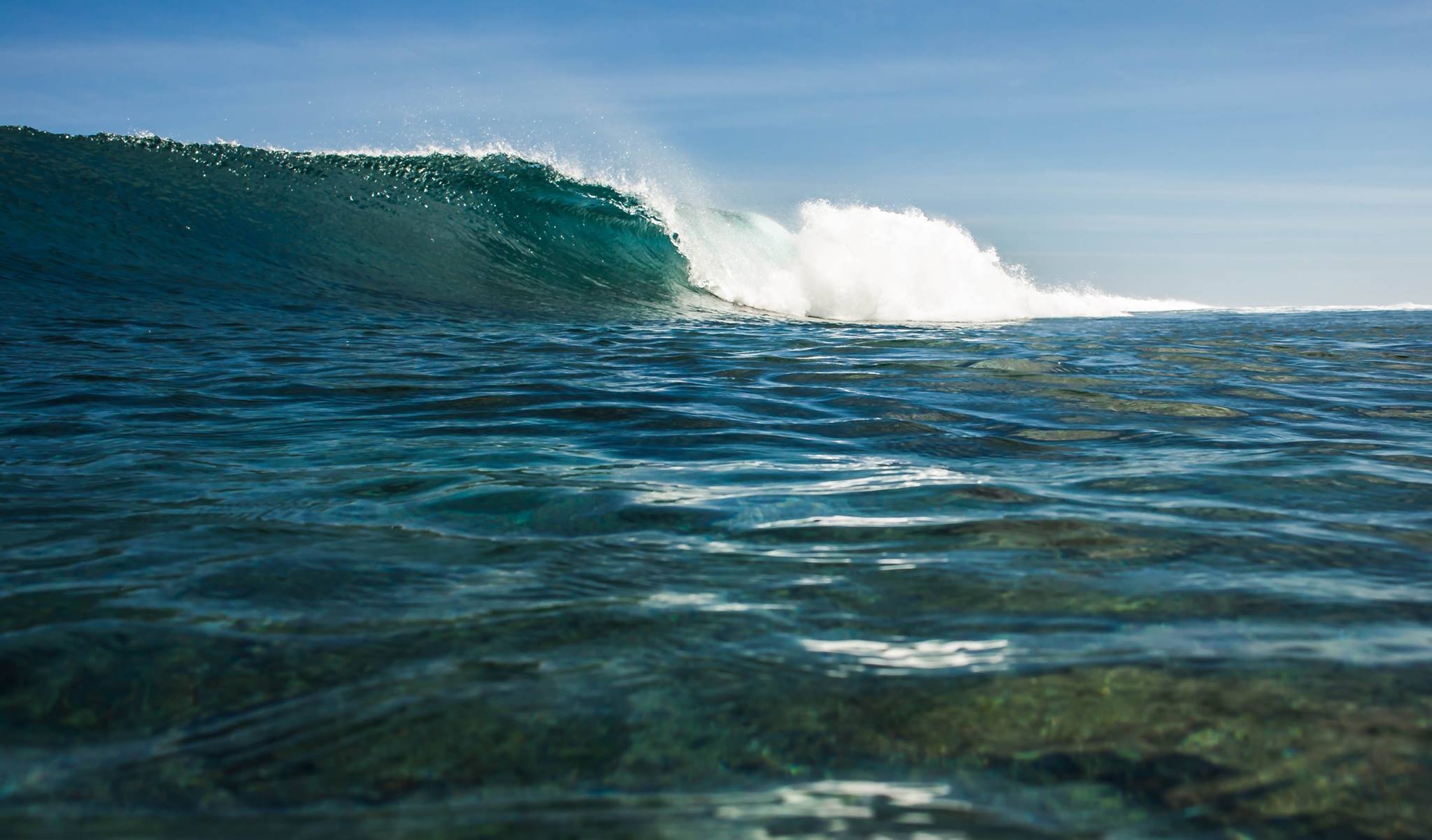 Pistols is above Rifles and also doesn't break as much as the others. It is shallow so suitable for confident surfers. It's not as shallow as it seems in the photo (the water is super clear).

4 Bobs is fun for all surfing levels and is about 15 min from M.I.A Surfcamp. 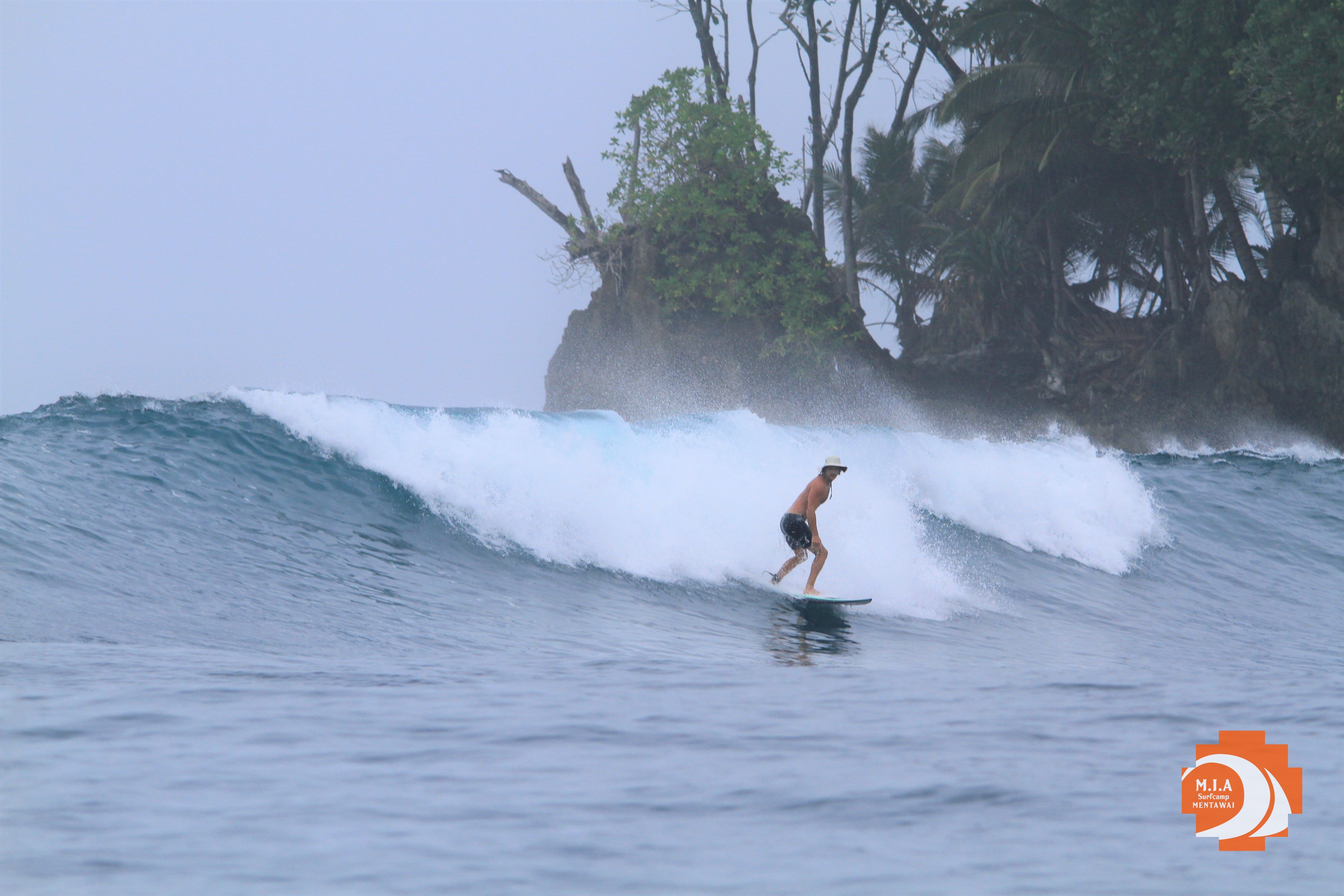 Burger world has a beautiful backdrop for photo's and is the go to wave when there is little swell. It doesn't break over 3ft but a great place to snorkel as well.

May to September is the peak season for surfing. Mar, April, Oct & Nov and 'off' season can be better because of the smaller crowds & more mellow surf. Rainy season is Sept-Dec with heavy rain for 2-3hrs per day but that doesn't effect the surf..

Surfing Mentawais simple has it all, wherever you are staying you will have access to the most consistent surf in the planet. There are over 50 recognised spots and countless others.

The North
The largest island of the chain is Siberut. There is a huge selection of surf at the southern end of this island. The Nyang- Nyang reef points such as the world class left E-Bay and the right, Riffles ,are considered to be some of the most perfect waves in the world. Bank-vaults has now become infamous for one of the best waves around but is only for the experts.

In the same area you will also find plenty of playful less charging waves including Playgrounds, Tikis, Burger World and the fun right-hander wall Pitstops that ends on a sandy beach

Central
This island hosts Telescopes which is a consistent left that can peel for up to 200 metres and is good for almost all abilities. Scarecrows is a short, wedgy left which is best on best on a dropping tide.

In the south of Sipora you will find the well known surf breaks Lances left and Right. Lances Left is super fun and playful with a barrel section in the middle. It's beautiful turquoise water and perfect shape make it among the most photographed waves in the world, and one of the easiest to get barreled.Lances Right on the other hand is shallow, short, and advanced level only.

The South
South are the twin islands of Pagai Utara & Pagai Selatan. One of the worlds most famous waves Macaronis lies off Pagai Utauru. This ultra consistent left is a perfect deep barrel on the first section and then backs off to into a really fun wall.

Further north you have Bommie Peak which is only for the big wave hellmen.

Come Surf the Mentawais with us...