Select your arrival date from any of the 'AVAILABLE' dates shown in the calendar.

Once your arrival date is selected, you will be shown confirmation of any relevant options available for this package.

You will then be able to select your preferred option and book!

What’s more, we are just a short walk (12 minutes) and a breathtaking descent down to Praia Grande, via a set of steps famed for its prehistoric dinosaur footprints. The house is also situated between Almocageme and Praia das Maças. Both are small picturesque Portuguese villages with a range of restaurants, bars, small shops and cheap local markets (a great place to buy your week’s supply of fresh fruit and vegetables).

The Saltyway house, a typical Portuguese ‘Moradia’, is perfectly located between the waves and the mountains. Whether you’re here to surf or climb you will be right in the heart of the action.
The house is beautifully situated off the beaten track, right in the heart of nature in Colares near Lisbon. We enjoy the tranquility of the Serra 24/7, a silent nights’ sleep and early surf wake ups with the birds. We light up a fire in the living room at night and enjoy the cosy atmosphere of this big room with the big windows. The kitchen offer all you need to make a good meal.

SURF CLIMB Portugal has been welcoming Surfholidays.com guests since Jan 2010

Chat with the host who can help organise your trip:

We provide Airport Transfers from and to Lisbon and they can be booked in the booking steps.

This corner of Portugal is littered with a variety of breaks suitable for riders of all abilities. From super fun beachies to endless point breaks and rippable reef breaks, you can find every type of wave here.

We know that active parents sometimes just need an extra pair of hands so they can enjoy their passion, climbing or surfing. So at Saltyway, that’s exactly what we offer. Children can join in the fun (6 years +) or stay with one of the SaltyWay helpers during the lessons.

From Monday to Friday, our highly qualified, experienced and motivating surf instructor will take you to the surf spots, in the best conditions and with top of the range equipment. Each surf session is taught in a fun, no pressure manner and is adapted to the personal needs of each and every guest. The surf session also goes hand in hand with daily theory lessons.

This package offers the best of both the ‘Surf Course’ and the ‘SURFari’ package. It caters for those with some existing surf experience but who wish to take advantage of the expert advice from our instructors on 2 days, video analysis, hitch a ride to the best surf spots, yoga lessons and develop their theoretical knowledge of surfing.

We enjoy Yoga 2 a week as an gratis addition. 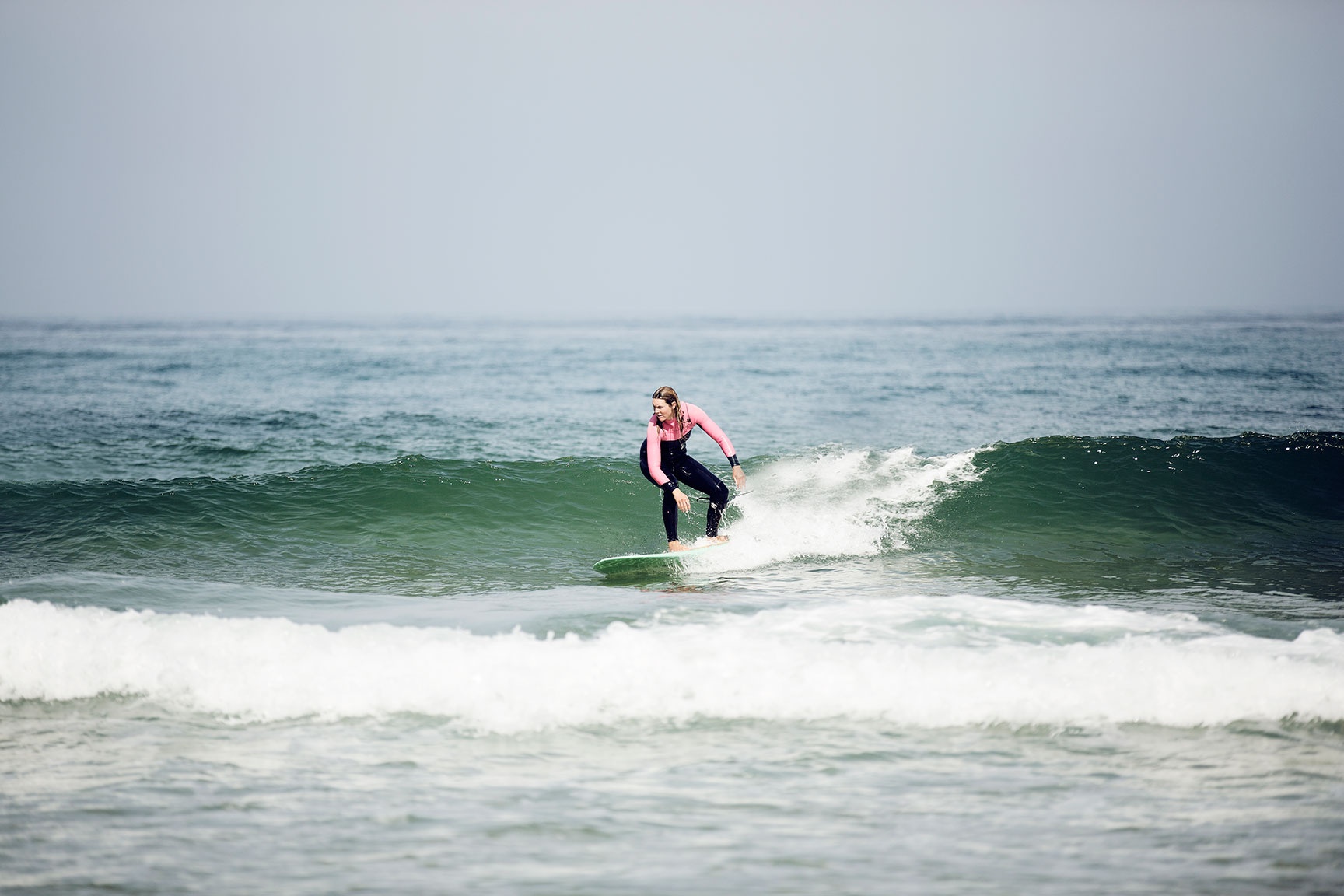 PRAIA GRANDE & PRAIA PEQUENA, SINTRA
Or ‘big beach’ and ‘little beach’ as they translate in English, are swell magnets and some of Portugal’s most consistent beach breaks. Fortunately for us the Surf House is set back in the hills overlooking these impressive beaches. Praia Grande is a 1km long sandy beach that produces super fun lefts and rights all along the beach, a perfect surf spot beginners in the summer. Praia Grande boasts a number of great cafes and restaurants to kick back and relax in with a coffee whilst watching the action unfold in the water.
In contrast, Praia Pequena has a completely different set up and mellower vibe. It is a small cove with restricted access and a crowd that rarely exceeds ten guys. This beach is known for it’s playful wedgy right and left hand peaks. It’s a great place to escape to when Praia Grande is busy. 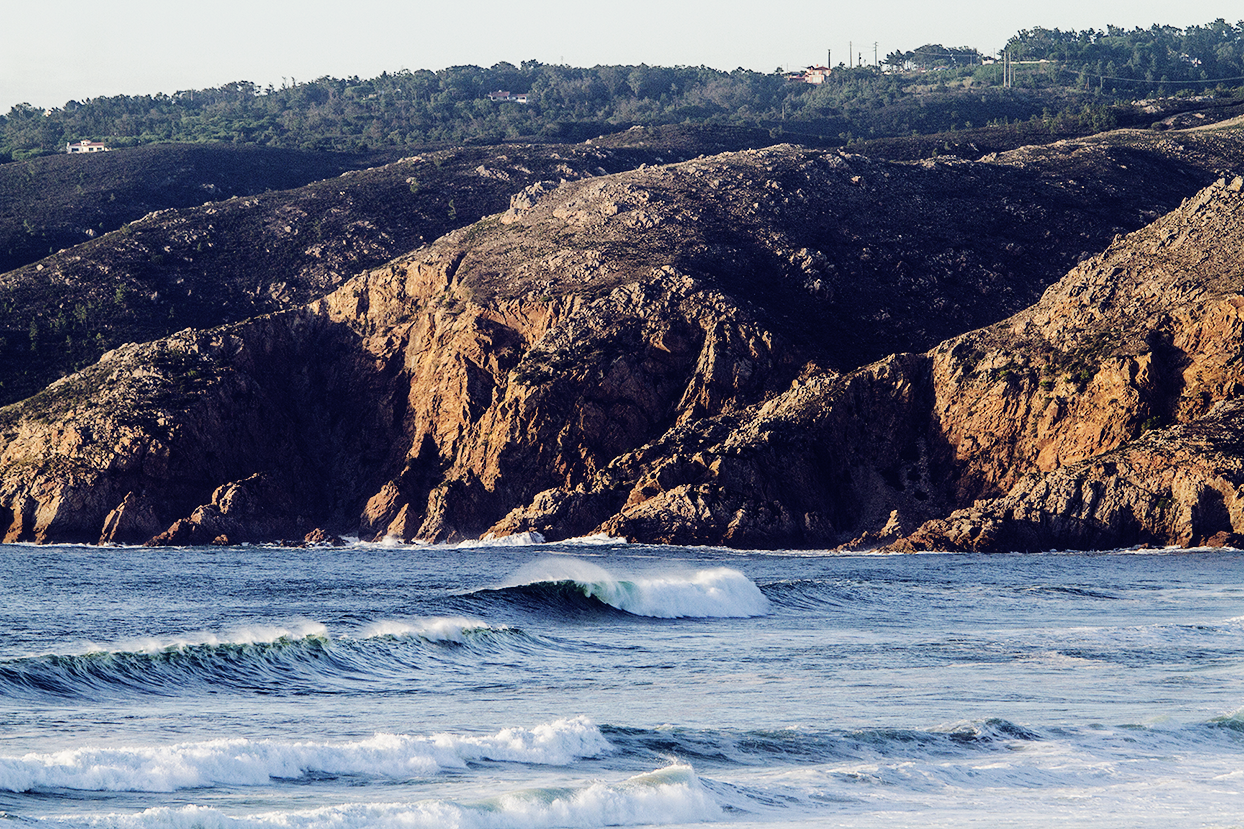 Guincho, a stunning 800m beach located at the foot of the Sintra mountains and surrounded by rolling sand dunes and the turquoise blue of the Atlantic. It’s a pleasure just being there let alone surfing there. Fortunately for you it’s one of the most consistent spots in the area so there’s a good chance you will get to appreciate its beauty and ride the super fun waves. The waves predominantly break to the left at the Southern end of the beach, while in the middle of the bay produces bowly rights and lefts. On the Northern end you will find more relaxed rights. 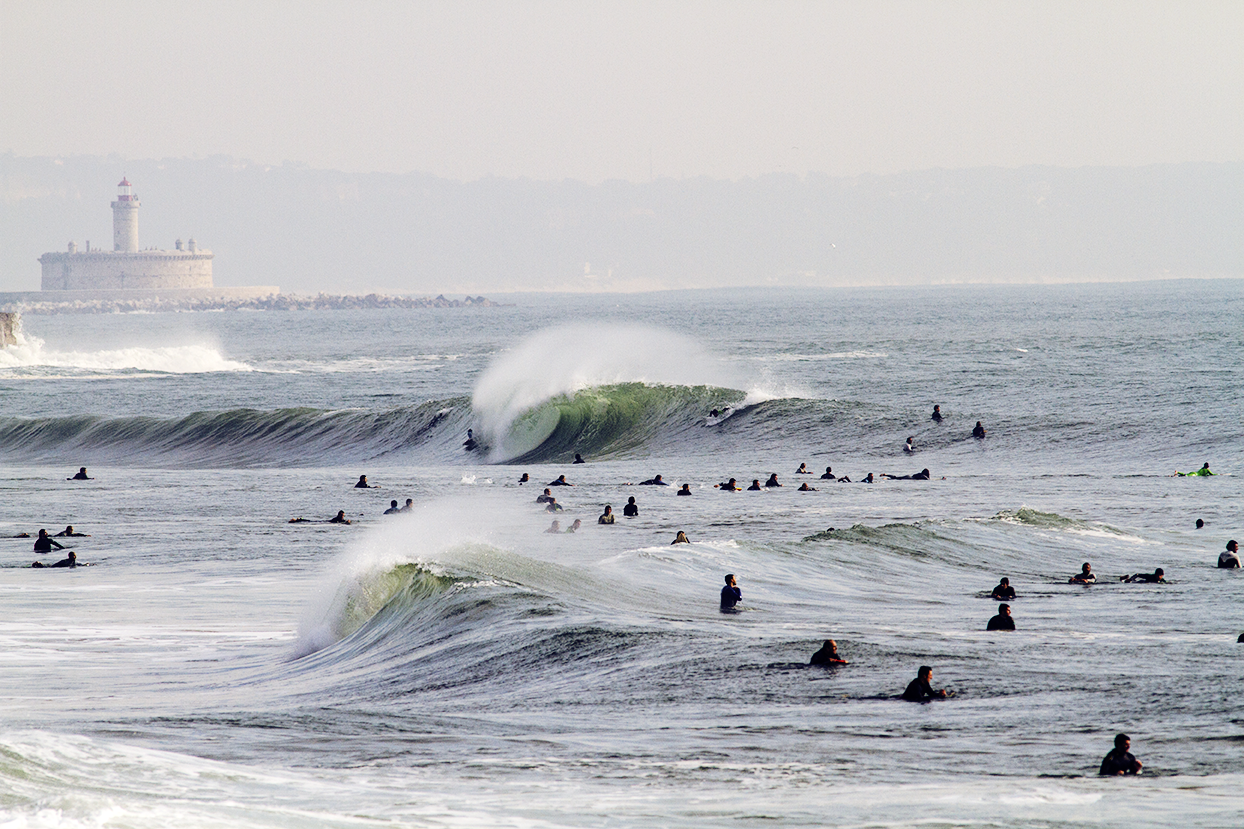 Regarded by most as the birthplace of Portuguese surfing and famed for it’s iconic 16th century military fort that proudly sits at the Sourthern end of the beach. This 1km sandy beach produces excellent peaky, punchy and barreling waves through all tides. It is a good option when the wind is Northerly and the West coast is too big. When this place is good, it is so much fun to surf whatever your level.

Sintra's two main beaches are Praia das Macas and Praia Grande. Both are perfect beginner/intermediate beaches and are some of the most consistent surf beaches in the whole Lisbon-Sintra area. North and South of these beaches are many small coves and beautiful hidden beaches that provide any exploring surfer with plenty to get excited about!

Close by is Praia Guincho, a spectacular long beach with different peaks, perfect for learning and can get big and windy in the afternoon, so morning is always the best bet here.

Ericeira is only 30 minutes drive and is definitely worth a day trip at least, it has dozens of surf beaches to offer including the famous point break Ribeira D'Ilhas and also the relaibale beach break Foz do Lizandro.

Further South is Cascais and Lisbon with an endless supply of different surf beaches for all standards.

Come Surf Sintra with us!

We would be more than happy to help you. Our team of advisors are at your service to help you.

SURF CLIMB Portugal has been welcoming Surfholidays.com guests since Jun 2015

Chat with the host who can help organise your trip:

Checkin:
Checkout:
PAYABLE NOW
How it works
HOW IT WORKS
SPECIAL: Book with us today and receive a 10% discount off surf clothing at Surfdome.

Send a request to the host of SURF CLIMB Portugal, Sintra, Portugal

It was Julika’s inborn love of the ocean, nature and sports that led her, in 2015, to create SaltyWay. Born and raised in Kiel, Germany by the ocean, Julika has had a longstanding relationship with the sea. In her late teens Kiel became her base between extended trips to Australia, Mexico, Brazil, Indonesia, Morocco and Europe until 2008. Now she wants to share what she loves most.