Costa Rica is any surfers dream destination. Located between Nicaragua to the north and Panama to the south and not far north of the equator, this small little country has everything from Volcanoes, to rain forests, coral reefs and miles of sandy beaches.

The Central Pacific region stretches from the city of Puntarenas in the Golfo de Nicoyo down to Costa Rica's main surf town Jaco and to Dominical, Costa Rica's most consistent surf spot, and then on further south to the remote surf beaches around Drake's Bay.

The main focus points for surfers along the central Pacific coast is the surf town of Jaco. It is Costa Rica's biggest surf town. It developed as a one of Costa Rica's main tourist beach towns largely due to its close proximity to the capital San José (1hr30mins). You will find everything here; great infrastructure, world class restaurants, bars, shopping and a fun beach break for all levels.

Nearby you will find Hermosa Beach where the world surfing games were held in recent years. It's super consistent, picking up all swell directions. Depending on the banks at the time it can be epic, perfect peaks, closeouts or anything in between.

Fuerther down the coast is one of our favourite spots in all of Central America is Dominical. This laid back surf town is much less developed than Costa Rica's bigger surf towns Jaco or Tamarindo. It is argued that it is the most consistent surf area in Costa Rica. The surf can hold some real size without closing out so suits intermediatess a& advanced surfers. And the protected bay of Dominical is perfect for beginners/improvers as it picks up less swell.
+ More

Whether you have zero previous knowledge of surfing, or your are an advanced surfer looking for next level training, Surf Synergy's team of professional instruc...

A quiet oasis tucked away in the heart of Jaco, our property is the perfect home base from which to experience all the excitement Jaco has to offer. The tropic...

The Hermosa Beach House is a boutique hotel located beach front of one of Costa Rica's most famous waves. Wake up to crashing wave and sit poolside drinkin...

Selina Jaco is known for being a place to connect in one of the most popular destinations in Costa Rica. This is where our tribe congregates, whether at our swi...

Close to the beach, nightlife. My place is good for couples, solo adventurers, business travelers, surfers and furry friends (pets). A small B&B in the r...

Costa Rican Surf Hostel that can accommodate 56 guests in dorms or private rooms, it has a nice garden and a swimming pool, you can store your boards relax and ...

Boutique hotel located on the south side of Playa Dominical, walking distance to one of the best breaks in the Southern Pacific of Costa Rica and a short minute...

An ideal Costa Rica house on a beautiful property atop a hill in the jungle. The house has four private rooms with private entrances and bathrooms and can accom...

You will not be left with nothing to do while in central pacific Costa Rica. Base yourself in Jaco or Dominical where you can explore rain forests, volcanoes, waterfalls, and rivers and get involved in an array of activities including zip lining, Kayaking, rafting, fishing, horse riding and more. Dominical alone has 15 waterfalls close by.

To generalize a Costa Rican meal, one would certainly have to talk about black beans and rice (gallo pinto). This simple, standard dish, often referred to as 'comida tipica', is the backbone of Costa Rican cuisine.

In general Costa Rican food is quite healthy often served with nuts, veg or both. Depending on what part of the country your in, the food can vary hugely. Lunch is usually the main meal of the day.

Surf towns like Jaco offer a broad spectrum of food from find dining and international cuisine. Smaller surf towns like Dominical allow you to really explore and shop at street markets and small local restaurants.
How to get to Jaco in Costa Rica

Fly into San José, Costa Rica's capital city. Public bus to Jaco leaves every hour and will take you 2.5 hours. Its comfortable and inexpensive, Driving straight is 1.5 hours. There is a modern highway so the route is very easy.

How to get to Dominical in Costa Rica

Fly into San José and get a connecting flight to Quepos. From Quepos Dominical is a 30 minute drive.

From San José there are two driving routes to Dominical. The quickest is to head to Jaco and then drive down the coast. It takes 3.5 hours. You can also go inland towards San Isidro which takes 4 hours. Public buses tend the take up to 6 hours so if you arrive in the afternoon you may have to overnight in San José.

Valid Passport required and most visitors can stay up to 90 days.

Car Hire
We have a discount car hire section on our website where you can rent a car. Rent your car from the airport and drive.
The bigger swell season in the Central Pacific area is from May to November with waves consistently from 2-6 feet, sometimes bigger. Costa Rica's summer months & dry season is from December to April. Waves tend to be really fun clean 3-4 foot.

The main beach in this surf town is a long 3 km beach break good for beginners and intermediates with many different peaks. If the swell gets above head high it tends to close out. South of the bay is Roca Loca, a right reef break that can hold up 10 feet at times.

Further south is Hermosa beach. It has a really good vibe to hang out, meet people and get in the water every day. It is a 7km long dark sandy beach breaks that works best on high tide. If you want to escape the crowd head further south. The beach packs a punch and when it's bigger it will rip those board shorts right off you and challenge even the best surfer.

Further along the coast you will find Esterillos about 10k south of Hermosa. Another fun beach break that is a swell magnet and if your looking for an uncrowded wave, take a walk down the beach and pick a peak.

Still heading south you will find other spots include Seco, Bejuco and Playa Espadilla, a great beginners surf beach in the popular surf town of Manuel Antonio.

Surfing Dominical
Less crowded than other surf towns in Costa Rica. Dominical is a much longer trek from San José so it does not tend to get the same amount of surfers that Jaco has. Dominical is a wave magnet and has been called the most consistent surf spot in Costa Rica. The towns main break, Playa Dominical works best on Mid to high tide as at low tide it can be just a shore dump. It tends to be a better spot for Advanced, intermediates as it can get powerful.

2km south is Dominicalito, a beachbreak that is great for beginners. Further on 1 km is The point, with rides of up to 250 meters! There are many more breaks to be discovered, and teh further on south you go the emptier the breaks. 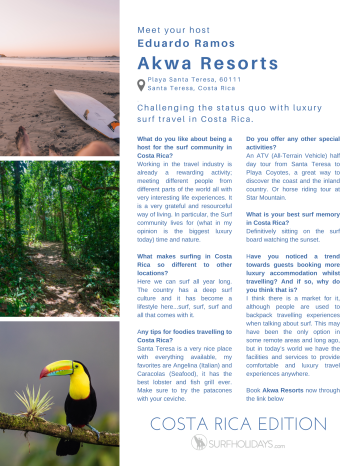 Meet your Host - Eduardo from Akwa Resort in Santa Teresa

We sit down with Eduardo from Akwa Resort in Santa Teresa, 3 minute walk from ...
read more
4 months ago