Alex Hickman
England has some incredible waves for all levels of surfer, from grinding reef break barrels at spots like Porthleven; big wave spots, such as The Cribbar and Oyster Falls to the world-class beach break peaks at spots like Croyde and Little Fistral, but there are also some incredible beginner surf beaches in England.

The beaches in this article offer an excellent platform for a first experience amongst the waves, and will give you the ideal conditions to master the basics. Before long you’ll be trimming along the green part of the wave and whipping in some turns and cutbacks on your surf holiday.

Below you will find seven of the best beginner surf beaches in England. 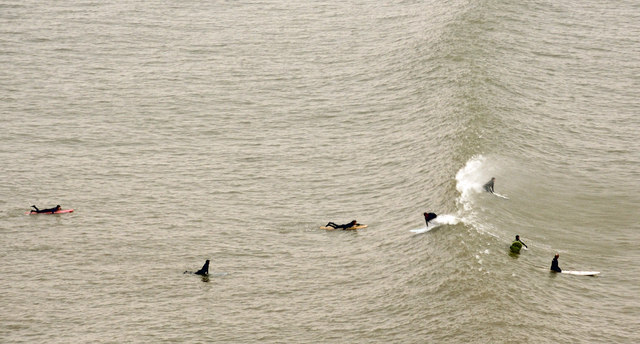 One of the best beginner surf beaches in England, Saunton has manageable walls at all stages of the tide and is considered one of the premier long board waves in the country. These long, slow breaking left and rights dish out the perfect conditions to learn to surf in England, with 5-miles of open beach you can always find a peak to yourself.

Town: Saunton.
Where: North Devon, South West England.
The Area: Rolling green hills, granite cliffs and beautiful coastal villages. An inviting and lively atmosphere in nearby Braunton, Croyde and Woolacombe.
Beach: Five miles of golden sands backed by the largest dune system in the UK, Braunton Burrows.
Type: Slow peeling left and right walls that can reach over 150m on the right swell.
Best Time: April - October
Weather: Devon and Cornwall are lucky in the fact that the Gulf Stream runs up past the counties, making the water a lot warmer than the rest of the UK. You may even get some great beginner waves in 26°C sunshine! The summer months see the sea water reaching 19°C in the height of the summer, and after a long flat spell, the water can get even warmer, so you may even be able to go for a surf in a shorty or long john. 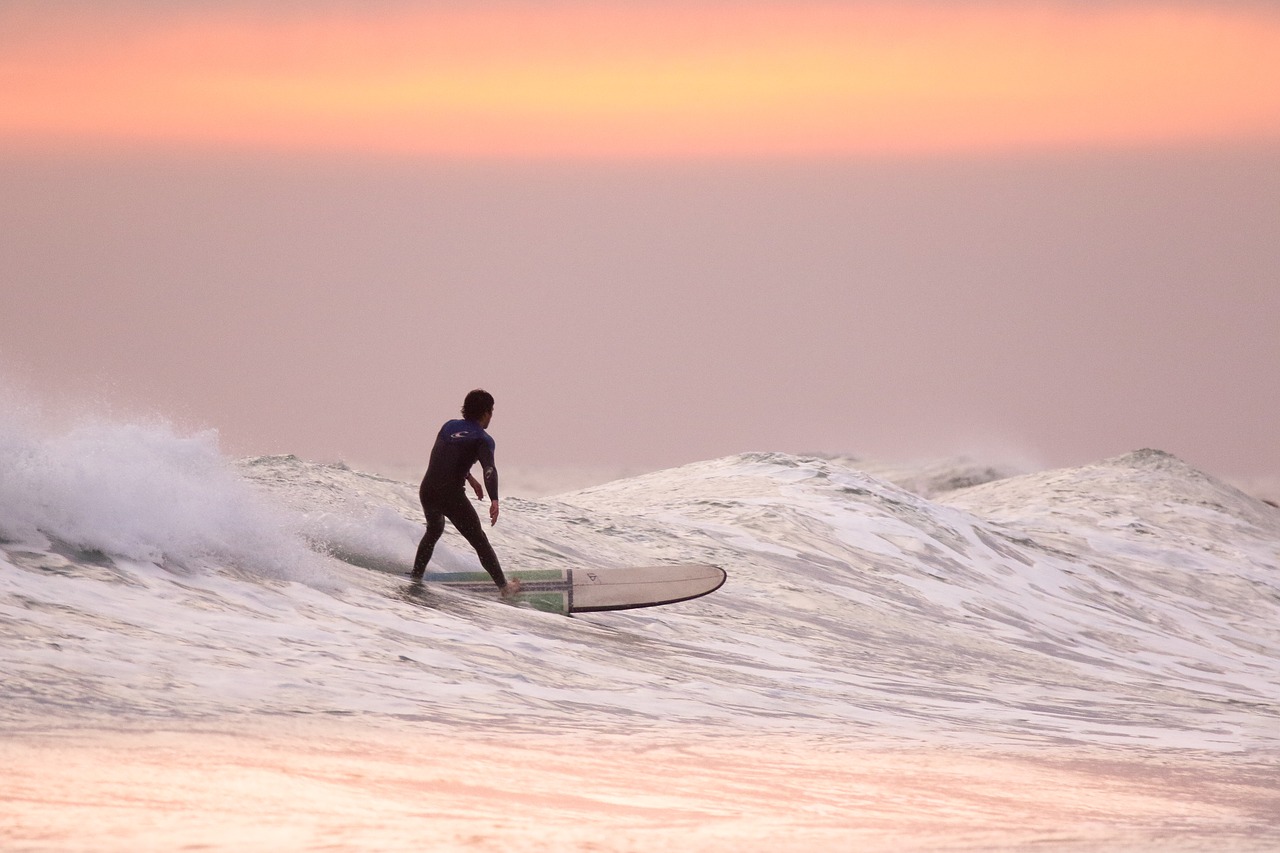 Widemouth Bay is a long stretch of beach that has become the area’s go-to surf school and beginner surfer break due to its variety of peaks and user-friendly walls and is often considered one of the best locales to learn to surf in England. Good at all stages of the tide, with a variety of breaks, local surfer Reubyn Ash grew up surfing this wave, which gave him the skills to become the UK’s top surfer.

Town: Bude.
Where: North Cornwall, South West England.
The Area: Bude is considered a typical seaside resort town, but with a strong surf vibe. There are plenty of restaurants and cafes to refuel after a day of great beginner waves. There’s a thriving nightlife scene during the summer months where locals and tourists converge together for a night of fun.
Beach: A long expanse of beach that is broken up by rock formations and surrounded by green hills and granite cliffs.
Type: Punchy beach break peaks, offering up left and rights. There’s also a good right-hand bank at the northern end of the beach.
Best Time: May - September.
Weather: Summer daytime highs of 26°C, with the water hitting nearly 20°C during the beginner surf season months of August and early September. 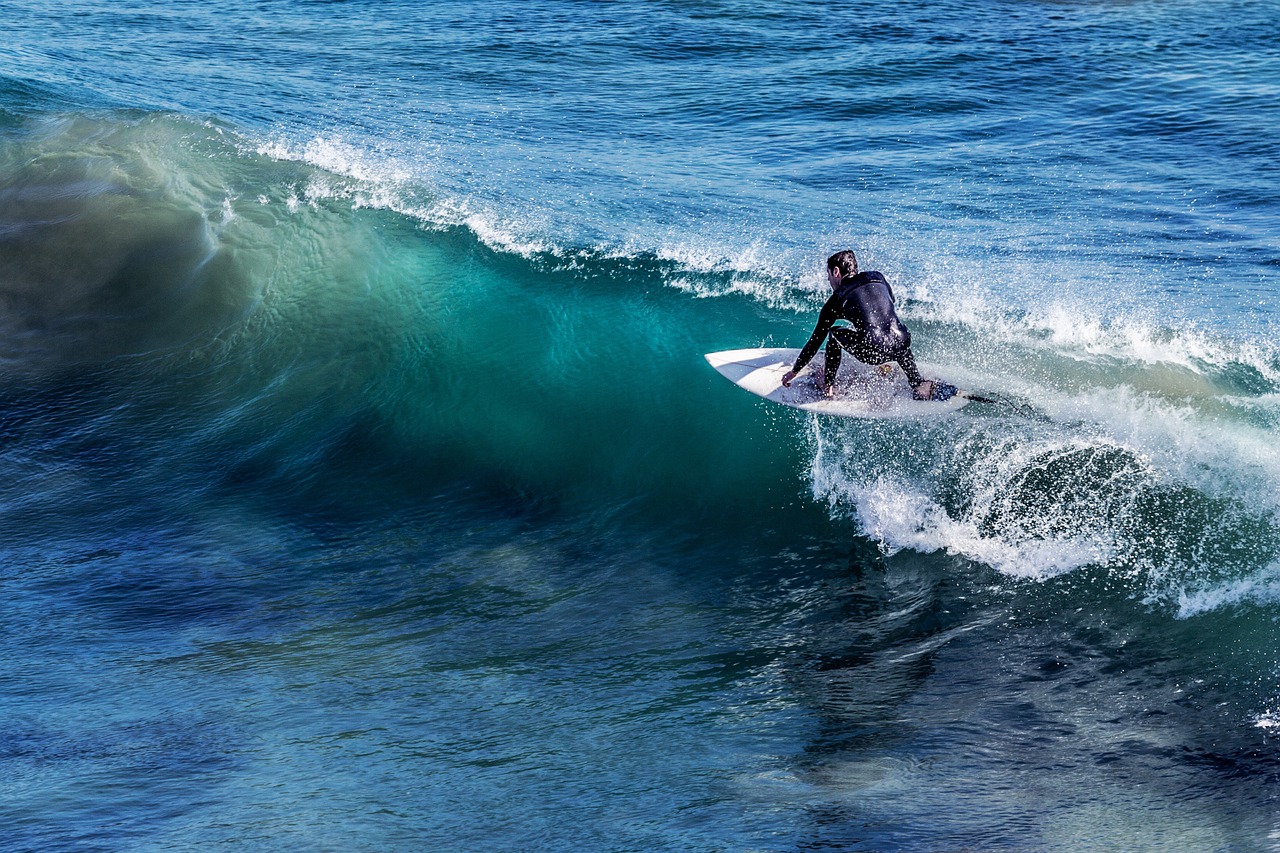 Photo:  Vladimir Kudinov/
With the hordes of surfers in Newquay attacking the waves at Fistral, a good option for some smaller rides away from the crowds is Lusty Glaze,  just around the corner. It works at all stages of the tide, producing both left and right peeling walls, that are perfect for mastering the basics. A beautiful beach that is ideal for a day trip, just be aware of the backwash that can occur when the high tide is over 9m.

Town: Newquay.
Where: North Cornwall, South West England.
The Area: Newquay is considered the UK’s surfing mecca, there is an unlimited amount of surf shops, bars, restaurants and a now infamous nightlife scene, where people from all around the country head for a weekend of fun.
Beach: Sheltered cove at high tide and a long expanse of beach at low tide that connects to Tolcarne and Porth Beach.
Type: Left and right walls that tend to pack a bit more power after the low tide push.
Best Time: May - October.
Weather: Summer daytime highs of 26°C, with the water hitting nearly 20°C during the beginner surf season months of August and early September. 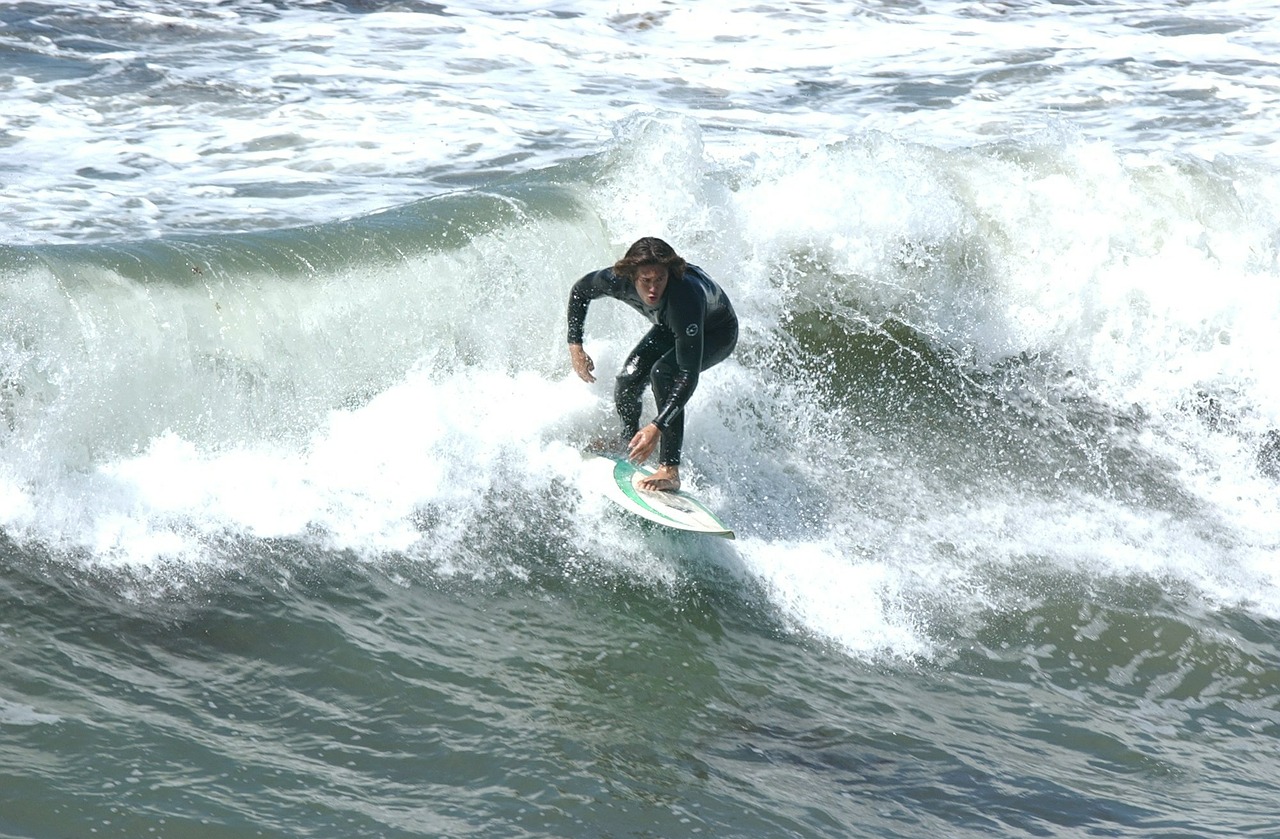 One of the most popular beaches on the south coast and for a good reason, it has great left and right peaks that have a bit more power than other beginner surf breaks. It is best surfed on a high tide in front of the Sand Bar. Be careful of the rips at low tide.

Town: Praa Sands.
Where: Southern Cornwall, South West England.
The Area: Praa Sands itself is a small coastal village that is surrounded by unrivalled natural beauty. Head to nearby Penzance or Helston for all your essentials and post surf food and pint!
Beach: Mile-long curved white sand beach surrounded by sand dunes and countryside.
Type: Fast walling beach break peaks that offer both left and rights.
Best Time: April - June and September- November.
Weather: Summer daytime highs of 26°C, with the water hitting nearly 20°C during the beginner surf season months of August and early September. 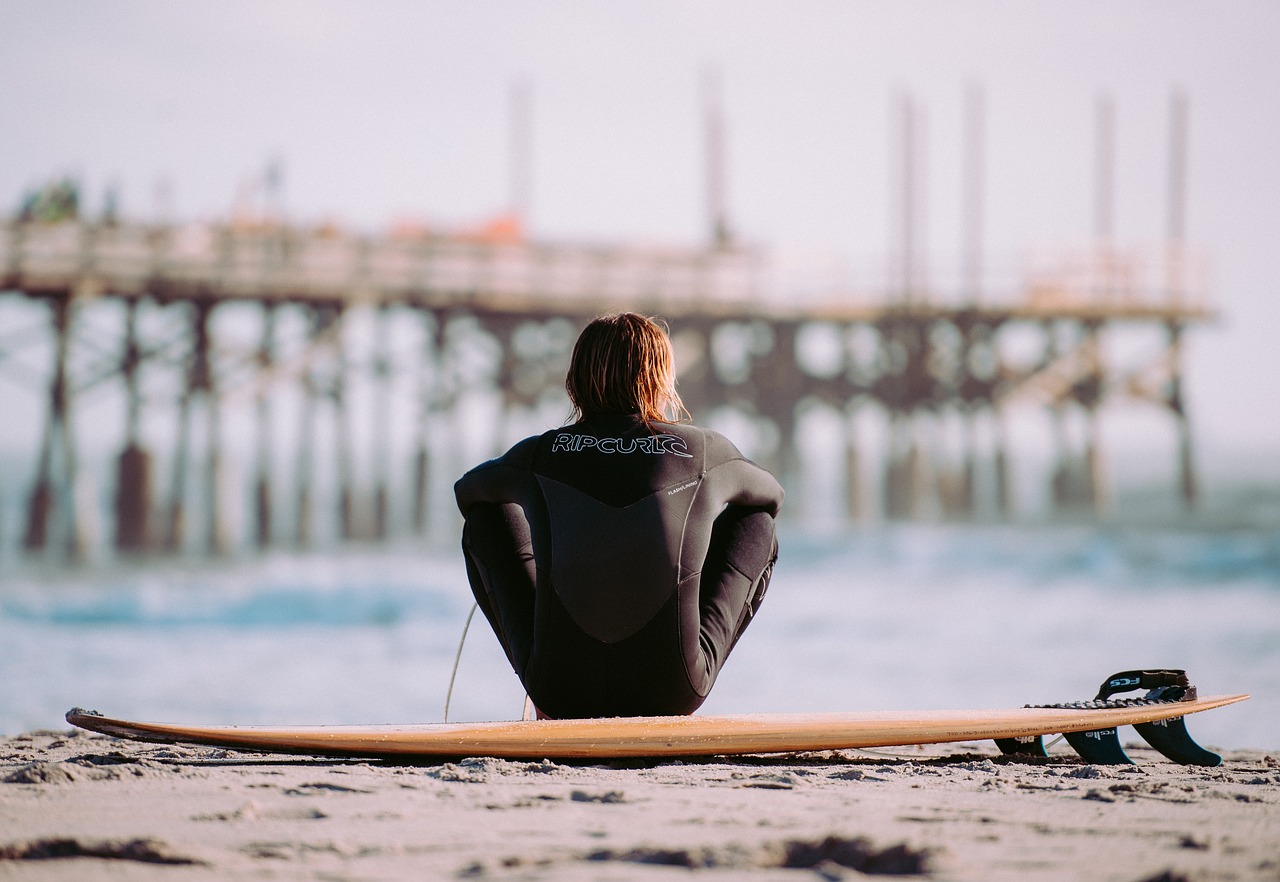 Boscombe surf doesn’t get big surf, but offers fun rip-able waves in a historic area, with plenty of good vibes in the water.  With some left and right peaks dotted along the beach and a fun right-hander peeling away from the pier, it’s the ideal location for regular footed beginners. Plus, it’s always fun surfing near a pier, as you get to your feet you’ll be cheered on by the holiday crowd as they enjoy their ice-creams.

Town: Boscombe.
Where: Bournemouth, Dorset, Southern England.
The Area: Boscombe itself is a traditional seaside resort town, with a promenade, pier and souvenir shops that are surrounded by outstanding natural beauty.
Beach: A long expanse of golden sand, with gently sloping cliffs and a pier.
Type: Left and right gently breaking walls and the extremely fickle artificial reef 250m from the shore.
Best Time: August - October.
Weather: The summer months can produce some beautiful weather with highs of 29°C with the water reaching 20°C. 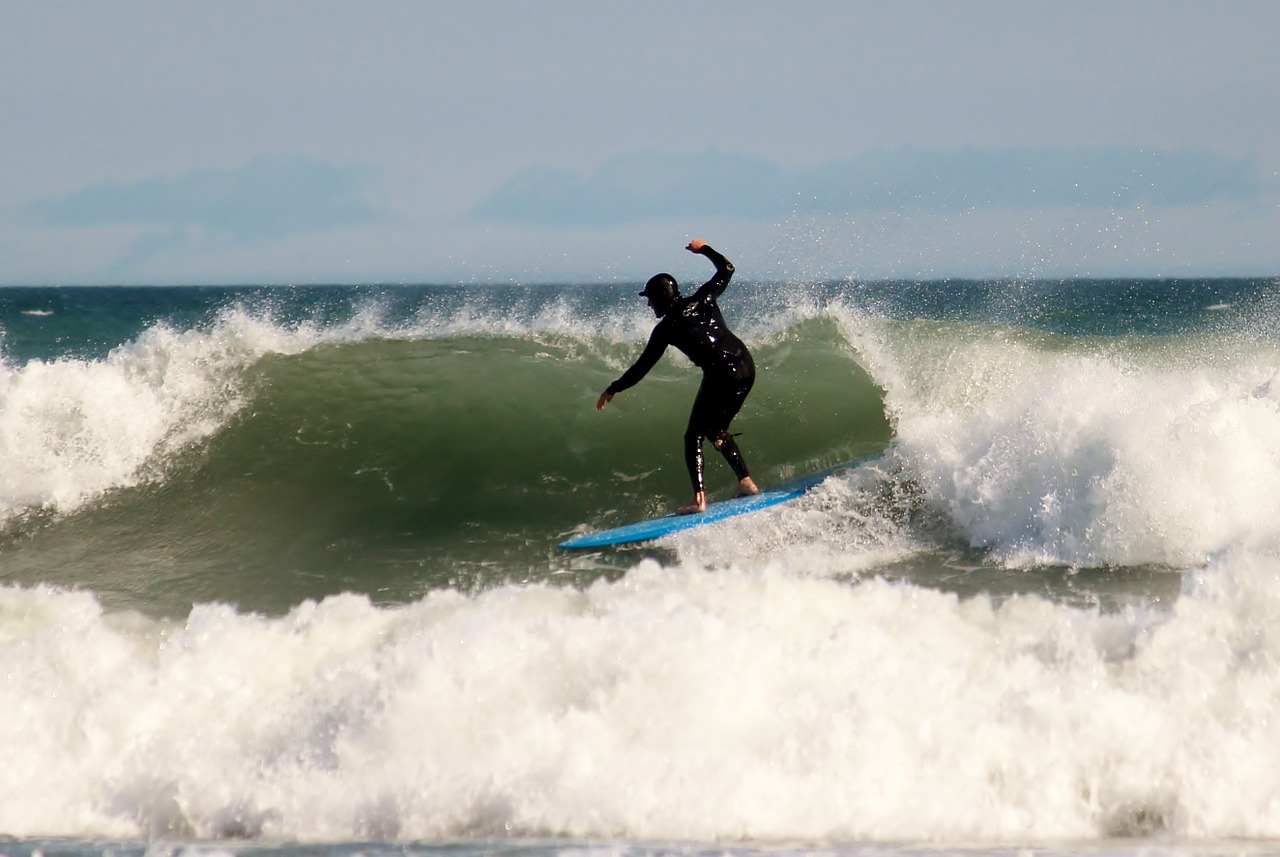 Located just south of Scarborough, the quiet and unspoilt Cayton Bay boasts excellent all-year surfing across three breaks; the Point is for more experienced surfers, so is best surfed towards the end of your surf holiday. Pump House has a bit more speed and is perfect for trimming high-lines back towards the pocket and Bunkers which has left and right peaks that are perfect to learn on as it has waves when everywhere else is flat.

Town: Cayton.
Where: Scarborough, North Yorkshire, Eastern England.
The Area: Scarborough is just a few miles north and is an iconic traditional seaside resort with a beautiful marina to wander through in the evening before filling up on fresh fish and chips.
Beach: Rustic and beautiful, Cayton Bay is a curved beach surrounded by rich green foliage and cliffs.
Type: The northern end of the beach has a reeling left-hander that will appeal to beginner goofy footed surfers while the rest of the beach has a variety of left and right peaks.
Best Time: August - October.
Weather: The water on the east coast reaches 17°C during the summer months, with daytime highs of 24°C. 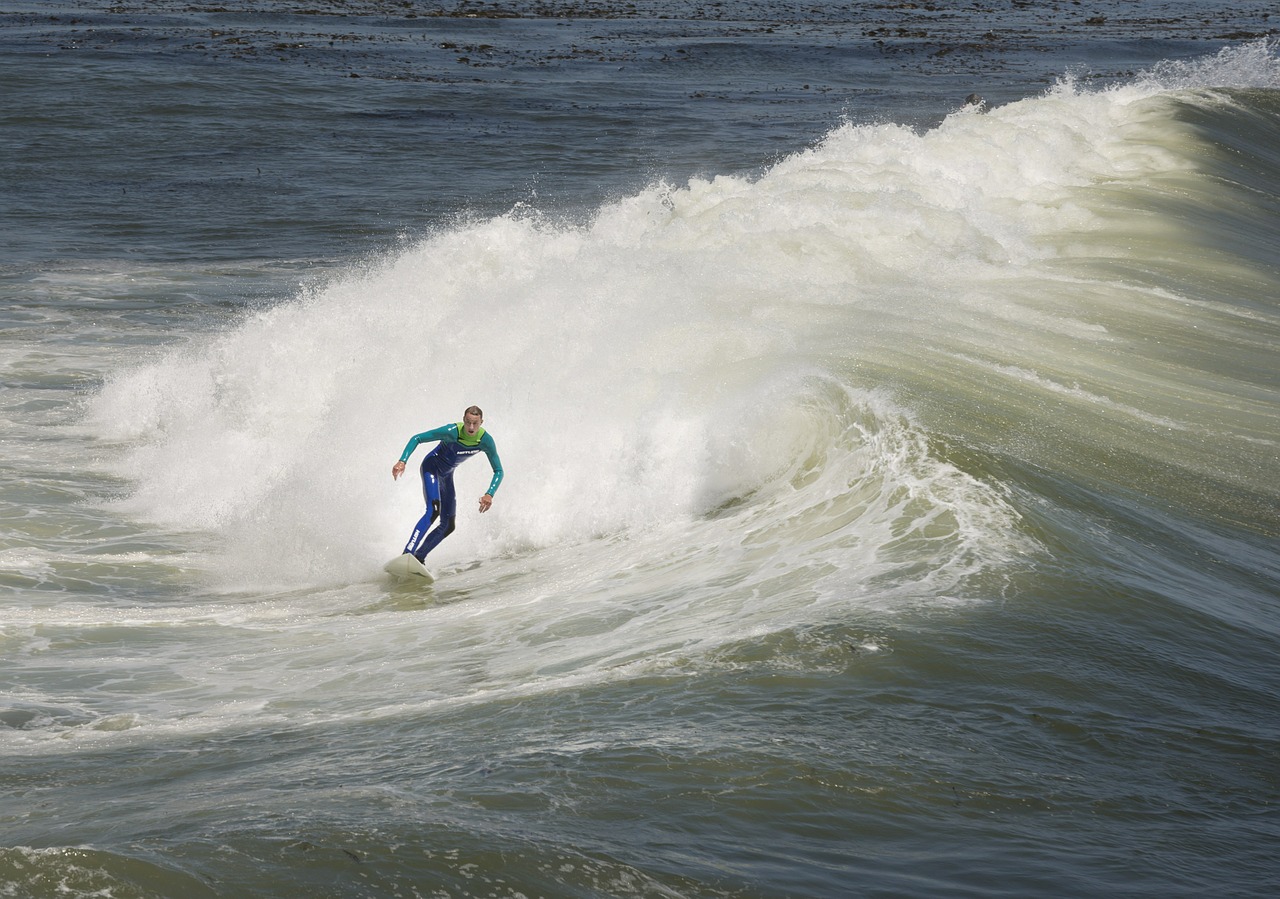 While technically not in England, it had to be on our list as Freshwater West is a huge beach with peaks dotted all along its length, this allows you to find a wall to yourself, allowing you to progress at a faster rate as you can catch more waves!  The main beach produces the more powerful peaks which will appeal to the beginner surfer ready to take their skill level up a notch, while the smaller coves towards the south end of the beach provide some smaller walls that are perfect for that first time in the salt.

Photo by: Roger A Smith